This is an era of artificial intelligence. Artificial intelligence is everywhere and has been integrated into our lives, especially for all kinds of robots. To understand the robot, we should understand the control system of the robot. The microcontroller we learn is equivalent to the brain of the robot. The various sensors installed on the robot are their eyes, noses, mouths, ears and so on. To make it easier for beginners to understand these principles, Keyestudio has released the 3.0 version of the sensor kit, which includes digital and analog sensors as well as special modules such as ultrasound, digital tubes, temperature and humidity. For each module, there is a clear connection diagram and sample code. So it’s easy to operate even you are a newbie.

The sample code of this sensor suite is based on ARDUINO because it is open source and easy to use. If you’re good at it, you can also apply this kit to other development platforms such as 51, STM32, Raspberries Pi, micro:bit, the working principle of those platforms is almost same. Now let’s enter the world of robotic sensors and learn together! 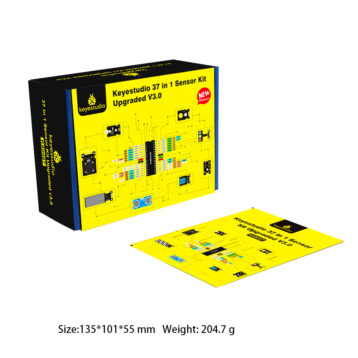